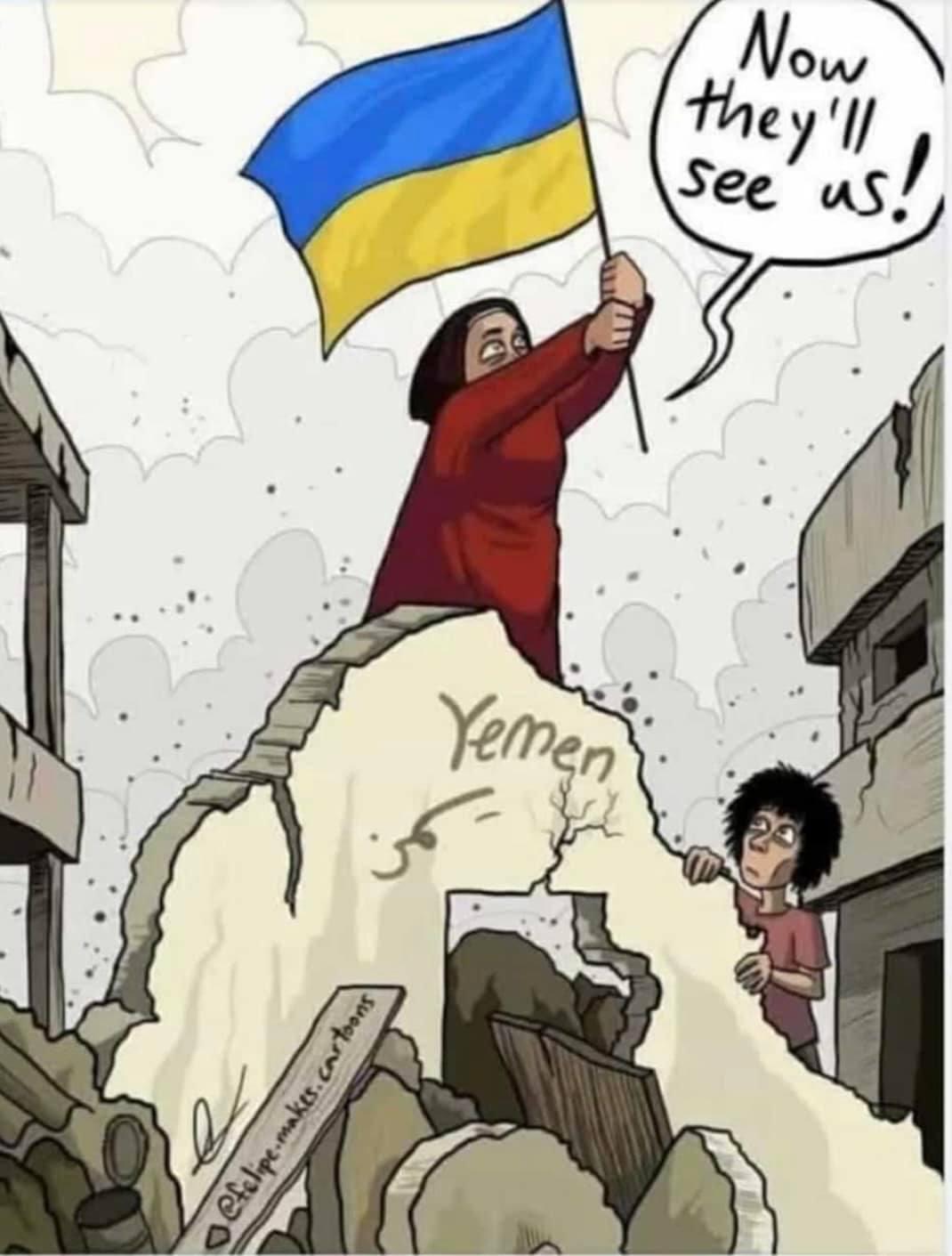 I was struck by the poignancy of this cartoon. I don’t know who drew it, but I saw it posted by a British Muslim group located in Nottingham. It suggests a deep frustration at the way that many have been gripped by the unfolding tragedy in Ukraine while remaining largely oblivious of the tragedy in Yemen. Whether this was posted in anger or merely sadness, I can’t say. What I can say is that there have been occasions when an overseas atrocity has galvanised the UK population in general, but has been met with shrugs from some of my Muslim friends, saying words to the effect “that’s nothing compared to…” followed by a reference to some other outrage which they care deeply about but we don’t.

At the very least, the cartoon implies criticism. Is it a fair criticism? No doubt many people, caught up in the daily drama unfolding on our screens, would be deeply affronted that such criticism be made. How could anyone make such comparisons? How could anyone begrudge the compassion and outrage that the invasion of Ukraine has unleashed? How could any try to score points when such evil is being perpetrated? It is not just that people are suffering horribly, it is that wickedness is going unchallenged. But that is the point of the cartoon. Not only have most of us been indifferent to the appalling suffering and wickedness going on in Yemen, but to one degree or another the UK is implicated in it.

Why was this cartoon drawn? It must come from someone deeply concerned for Yemen, grieved that it has not received the same sympathetic interest that enjoyed by Ukraine. Wounded hearts cry out “why don’t you care about our suffering? If you were really troubled by the triumph of evil, you would care about Yemen.” The fact is that we care most about the suffering of people we associate ourselves with. Most Brits see Ukrainians as “people like us.” Many of our Muslim neighbours feel deeply about situations where fellow Muslims are the victims.

One does not want to get into competitive grievance, but perhaps the nastiest conflict going on today is actually in Ethiopia, where it is alleged that horrendous, cruelties are being carried out by both sides in the hope of getting the other side blamed and censured, but it is getting almost no media attention. Those who weep for Yemen may envy the attention that Ukraine gets and those that weep for Ukraine might be affronted that others do not weep with them. Both feel righteous in their cause, neither realise there are other tragedies going on that do not touch them. The fact is we all have blind spots when it comes to evil, and we all have favourites when it comes to caring.